The Just on Track Show 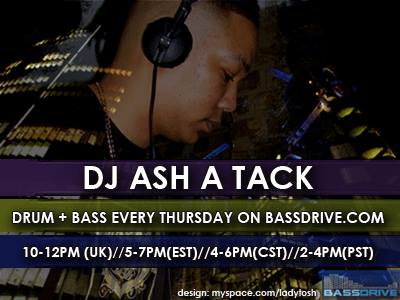 His career started at the early age of 15 originally playing Raregrooves and Lovers. His love for Drum & Bass began when he became resident at local boat and house parties. Ash’s longstanding career became more recognized at early day residencies for the infamous Moondance, Thunder & Joy,Telepathy and Rat Packs The Monday Club.

BM Soho (formerly known as Black Market Records) was the next big push for his career and becoming part of their collective allowed him to become more accessible to club promoters and clubbers.

Ash-A-Tack joined forces with www.bassdrive.com and his show ‘Just On Track’quickly became one of the stations leading, weekly shows. Home to his own, unique style and sound Bassdrive plays host to everything forthcoming from Ash-A-Tack every Thursday 10-12am.

His first record label ‘Life Records’ was recognised worldwide for tracks such as 'First Limitations', 'You Don’t Try' & 'Don’t' with fellow production partner DJ Alibi.  After feeling the industry was moving in a different direction, Ash took a big jump and found a new style and collection of new DnB artists that he wanted to push forward in the scene. He teamed up with partner DJ Damage to produce a new label, 'Directors Cut'.

Director’s Cut has taken the industry by storm, pioneering a brand new sound & direction in DnB. It is heavily supported by leading players; such as John B, Grooverider, Fabio, DBridge, ASides, Ray Keith, Dr S Gachet, Donovan ‘Badboy’ Smith, Kenny Ken, Roni Size & DJ Bailey aswell as featuring in KMag, Beatport, Track It Down and ITunes.  DC has had a series of releases featuring Courtney Dennie, Explicit, Command Strange, Undercover Audio, Section, Audio Habitat, Jazzatron, Trex, Script & D Side but is home to its own residents, Alibi, Philbee, Kalm, LJHigh, Real Deal and of course his own production. A series of DC label nights have already started featuring  all the resident acts and is set to grow and develop as a leading brand, recognized worldwide.