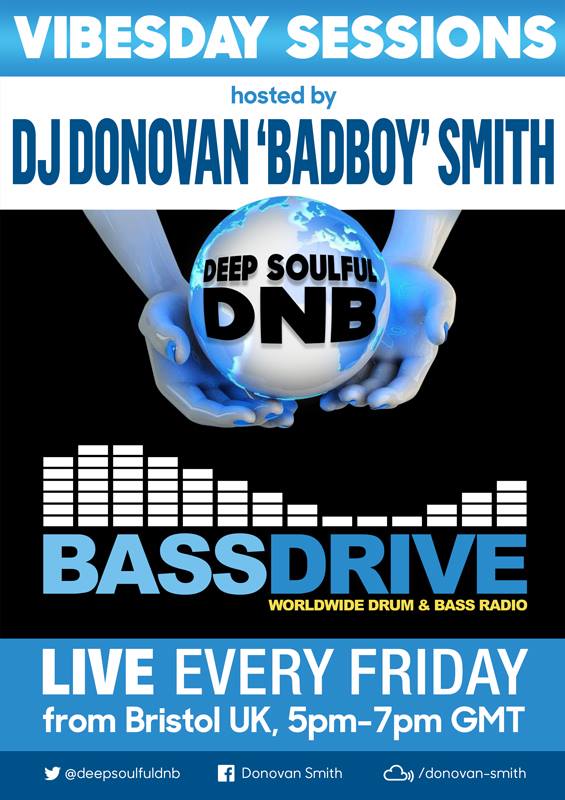 Radio DJ, mix master extraordinaire, mentor and one of the unsung heroes from the early days of drum and bass, Donovan ‘Bad Boy’ Smith’s - one of the original proponents of Britain’s Soul, House and Rare Groove scene – contribution to the UK’s underground music scene cannot be understated.

Playing a pivotal role in taking the sweaty, emerging, up-tempo, hardcore sounds that were bubbling up from the streets of London at the end of the 1980s and early 90s, Donavan disseminated these new jungle and rave sounds up and down the country via his residencies at superclubs like Swindon’s Fantazia and famed London hotspots such as the Astoria, Busby’s, The West End’s Gardening Club and Club Da Da on Shaftsbury Avenue.

Originally a competition winning dance, Donovan first caught the DJing bug in his mid-teens. Initially cottoning onto dance culture via tapes he recorded from the US radio station such as KISS 98FM. It wasn’t long before he began to travel around the south of England attending all-day Soul raves and early House club nights. He went to these events not with the intention of dancing or partying, but with the intention of learning the art of mixing from the American DJs he had first heard on those important tapes crudely recorded from the radio. Influenced by people such as Greg Wilson, Froggy and the now seminal American DJ, Dave Bumford, Donovan always the innovator, always looking for the next big thing, wanted to be a part of this exciting new beginning for British music and culture, was keen to get stuck right in the middle of it.

With his love for DJ culture firmly cemented, Donovan spent the 80s spinning grooves to captivated audiences the length and breadth of the country under pseudonyms such as ‘The Baron’ ‘Don the Glove’ and ‘Quick Eddie’. He secured numerous radio spots and began to meet some of the country’s soon to be most influential, revolutionary DJ’s and scene makers along the. With Hardcore and Jungle beginning to bubble up from the very underground he plied his trade within, Donovan, at the centre of this unique British spin on dance music, was a central figure in directing its growth due the unrivalled command and control he exhibited over the dance and radio waves.

Donovan’s infamous set at a Fantazia fronted rave in Stroud catapulted him firmly into the underground’s wider public consciousness. Rebranding himself as Donovan ‘Bassline’ Smith, the enigmatic selector went on to play starring roles in some of the most famous raves to ever grace the UK’s shores. It was playing at these events that Donovan’s gained his current moniker, with the then famous DJ/MC team Top Buzz coining the term ‘Bad Boy’ in relation to his hard, eclectic, partystarting DJing style and imaginative tune selection. In 1992 the always forward thinking Donovan released his first slab of wax, ‘Obsessions’ on the innovative Ruff Beat label, swifty followed up in 1993 with a collaborative double A 12” with Jack Smooth - distributed under the name ‘Ruff with the Smooth’ on the Reading based Basement Records label. The two tunes, ‘Art of Intelligence/Sound Superior’ served as two slabs of exploratory incarnations of proto-jungle and are still fresh today.

1994 was the year that firmly established Ruff and Smooth as a probing and talented producing partnership with another double A-side 12” ‘Twisted Girl/Whose Loving Me’ taking their already assured sound up a notch to the next level. At the same time Donovan had taken over the running of Basement’s record shop and the running of ARS’s English subsidiary ‘Street Beats’. This period in the Bad Boy’s career saw him releasing the first two of three split 12”’s on the lauded label under his new alias ‘Astral Vibes’, a progressive venture in partnership with Noel Newton, that saw the pair embracing the slower, deeper sounds of soulful house music and the project that would spread Donovan’s name the world over. Since those pioneering days in the late 80s and 90s Donovan has continued to DJ at high profile gigs and venues around the UK and the world, taking his feel-good party vibes everywhere he goes.

Still a prolific and active member of the constantly mutating and changing scene, Donovan continues to spread the vibes via his weekly exploration of all things DnB on the internet’s most esteemed jungalist outpost - Bassdrive Radio. From networking, running his radio show and listening to the masses of quality beats around at the moment, Donovan’s love for deep and soulful Drum n Bass is as strong as ever, with his recent trailblazing mix for Bryan Gee and Jumpin’ Jack Frost’s seminal label, V Recordings - on their recent ‘Liquid V presents Afterparty’ CD – epitomising this. British club music would not have been the same with Donovan ‘Bad Boy’ Smith.